Some of the regularly used Bitcoin wallets, for example, the Bitcoin Core wallet and the Electrum Bitcoin Wallet, set the locktime of newly constructed transactions to the current block height. This is as an anti-fee-sniping measure and visible as a stair-like pattern when plotting time-locked transactions by their mempool arrival time and locktime. The plot, however, reveals transactions time-locked to a future block height. These should, usually, not be relayed through the Bitcoin network.

Some Bitcoin wallets specify a lock-by-block-height with the current height when creating a new transaction. This makes a potentially disruptive mining strategy, called fee-sniping, less profitable. Fee-sniping is currently not used by miners but could cause chain reorgs in the future. Since the block subsidy declines to zero over time, transaction fees will become the main monetary incentive for miners. If a recent block contains a transaction paying a relatively high fee, then it could be profitable for a larger miner to attempt to reorg this block. By mining a replacement block, the sniping miner can pay out the transaction fees to himself, as long as his block ends up in the strong-chain. The fee-sniping miner is not limited to pick the same transactions as the miner he is trying to snipe. He would want to maximize his profitability by picking the highest feerate transactions from both the to-be-replaced-block and the recently broadcast transactions currently residing in the mempool. The more hashrate a fee-sniping miner controls, the higher is the probability that he will win the block-race. Miners have the risk of losing such a block-race, leaving them without reward.

A constant backlog of transactions paying a similar or even the same feerate would be needed to incentivize miners to move the chain forward. When mining a next block yields roughly the same revenue as sniping the previous, then a rational miner would not start a block-race. However, setting the current block height as a lock-by-block-height forbids a fee-sniping miner to use transactions from the mempool his replacement block. It creates an incentive to move the chain forward to be able to include the next batch of time-locked transactions in a block. While this does not fully mitigate fee-sniping, it reduces profitability. The more transactions enforce a time lock to the current block height, the less profitable fee-sniping is.

Example: Making fee-sniping less profitable by setting the current block height as a lock-by-block-height. Block b2, with a height of n + 1, pays its miner a high fee. Another miner, Eve, attempts to snipe block b2 with block b2*. The mempool includes two transactions paying a relatively high fee of one bitcoin each. However, Eve can only include transaction tx1 in block b2*. Transaction tx2 can not be included in b2* as it is only valid in a block with a hight of n + 2 or more.

Transactions observed by the Bitcoin Transaction Monitor project on December 17, 2019 are plotted. A stair-pattern of transactions with a lock-by-block-height is visible.

The transactions time-locked to the next block height have inputs with a nSequence number of 0xFFFFFFFF. The lock-by-block-height is thus not enforced. All of these transactions have common properties and share a somewhat unique fingerprint. All are spending P2SH, nested P2WSH, or P2WSH inputs and are BIP-69 compliant (inputs and outputs ordered lexicographically). Most of them pay a feerate of 12.3 sat/vbyte and all spending 2-of-3 multisig inputs. This leads to the assumption that these transactions are constructed with the same wallet or by the same entity.

The fingerprint, especially spending 2-of-3 multisig, limits the number of wallets or entities which the transactions could originate from. Reaching out to a possible entity, which prefers to remain unnamed, proved to be successful. They confirmed the two off-by-one-errors. Firstly, the transactions should be time-locked to the current block height and not the next block height. Secondly, at least one of the inputs should have a nSequence number of 0xFFFFFFFF-1 or less for the time-lock to be enforced. A fix for this has been released in early 2020. However, it will take a while before all instances of the currently deployed software are upgraded.

Some bitcoin wallets reduce the profitability of fee-sniping by time-locking transactions to the next block. This appears as a stair-pattern when plotting the arrival time and the locktime of transactions. The plot reveals transactions with locktimes higher than the current block height. These should, usually, not be relayed through the Bitcoin network. This leads to the discovery that a large entity transacting on the Bitcoin network does not properly set the nSequence field of their transaction inputs. This allowed for the off-by-one-error in the transaction locktimes to remain unnoticed.

I thank David Harding for commenting on an early draft of this article. I found the background information he provided to be very valuable. Any errors that remain are my own. 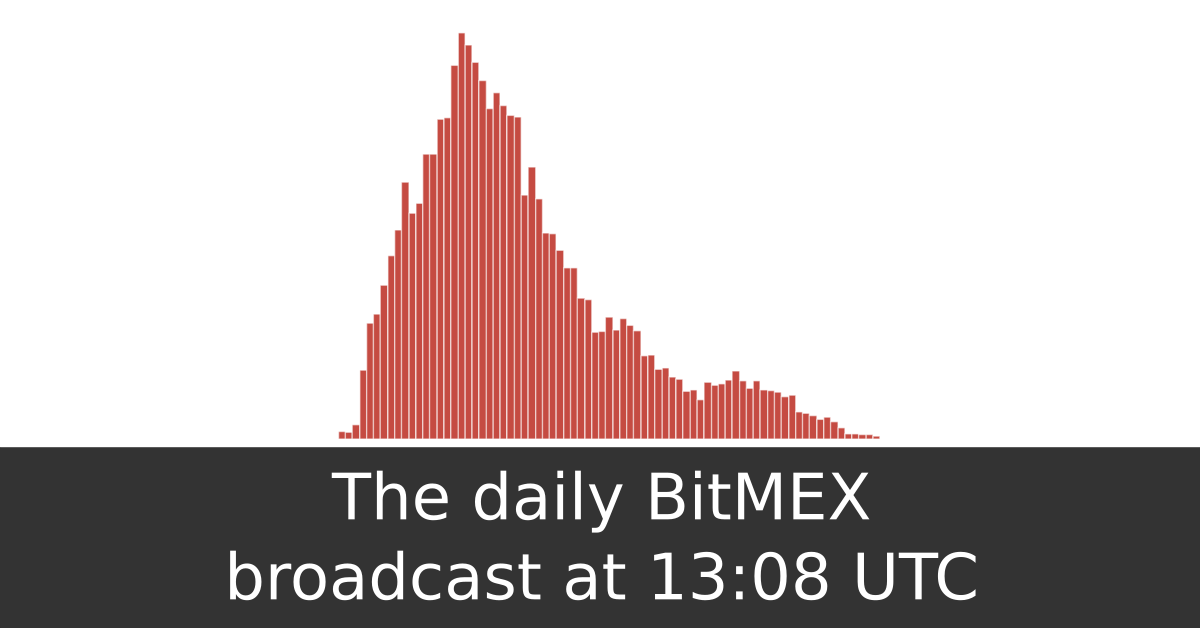 The daily BitMEX broadcast at 13:08 UTC

At around 13:00 UTC every day, BitMEX, a cryptocurrency exchange and derivative trading platform, broadcasts multiple megabytes of large transactions into the Bitcoin network. This affects the transaction fees paid during European afternoons and US business hours. The transaction size could be …